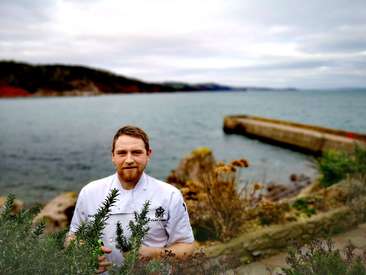 The award-winning “Inn on the Beach”, Cary Arms & Spa, is delighted to announce the appointment of Steve Poyner to the role of Head Chef.

Devon local,  Steve Poyner, was born in Torquay in 1991 and after graduating from South Devon College, joined the kitchen of the Cary Arms & Spa when it reopened after an extensive refurbishment by Peter and Lana de Savary in 2009. In 2010 he went to work at de Savary’s Oxfordshire hotel, The Old Swan and Minster Mill, where his skill and enthusiasm to learn led to his promotion to Chef de Partie after only eight months. Four years later and with much ignited passion and experience under his belt, Steve Poyner chose to return to his roots back at the Cary Arms & Spa as Sous Chef. Since 2014 he’s been working with a talented and close-knit kitchen team and has been instrumental in the philosophy and success of the restaurant – from their use of the finest local ingredients to their AA rosette.

General Manager, David Adams, comments: “Steve was the obvious choice for Head Chef and having had the pleasure of tasting his dishes over the years I am personally genuinely excited about him making the step up, he is a truly valued member of the team. His inherent love for his work alongside the knowledge he holds of local produce, being Devon born and bred, gives him the ability to extract the most delicate of flavours from the best of the area’s natural provisions. We are delighted to have him heading up our strong kitchen team and look forward to seeing the menu develop under his leadership.”